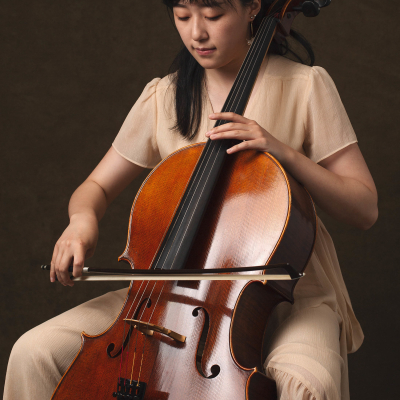 Lyla Lee is a Canadian cellist who is active in the music scene of Vancouver. She is currently studying with world-renowned cello virtuoso, Professor Eric Wilson while obtaining her bachelor’s degree at the University of British Columbia.

Lyla began her pursuit in music during secondary school as she commenced her studies with cellists Ian Hampton and Bo Peng. As Lyla led her high school cello ensemble, Cellissimo, she was captivated by the many possibilities of her instrument. Her passion for music was ignited during Summer 2017 at the annual Casalmaggiore International Music Festival in Italy, where she was engaged in chamber groups with other young artists from around the world.

Throughout her enrollment in the University of British Columbia, Lyla participated in a series of performances including vast amounts of chamber works and new contemporary pieces. She actively supports local music societies by collaborating with orchestras such as the Vancouver Inter-Cultural Orchestra (VICO), BC Chinese Orchestra (BCCO), and Sound of Dragon. She has also participated in numerous premieres of contemporary and experimental performances composed by distinguished Canadian composers. Lyla actively seeks to support her peers by demonstrating the cello in composition classes and performing new works of student composers at the University of British Columbia.  She is also part of a project at the Pacific Chamber Music Academy where she assists young artists through their initiation of music.

Lyla has obtained an immense amount of experience through performing at notable events such as the 2019 Michael Bublé concert in Vancouver, May Queen Festival, Chinese New Year Galas, gallery exhibits, etc. She is currently a member of the UBC Symphony Orchestra, Vancouver Youth Philharmonic Orchestra, and Vancouver Metropolitan Orchestra.